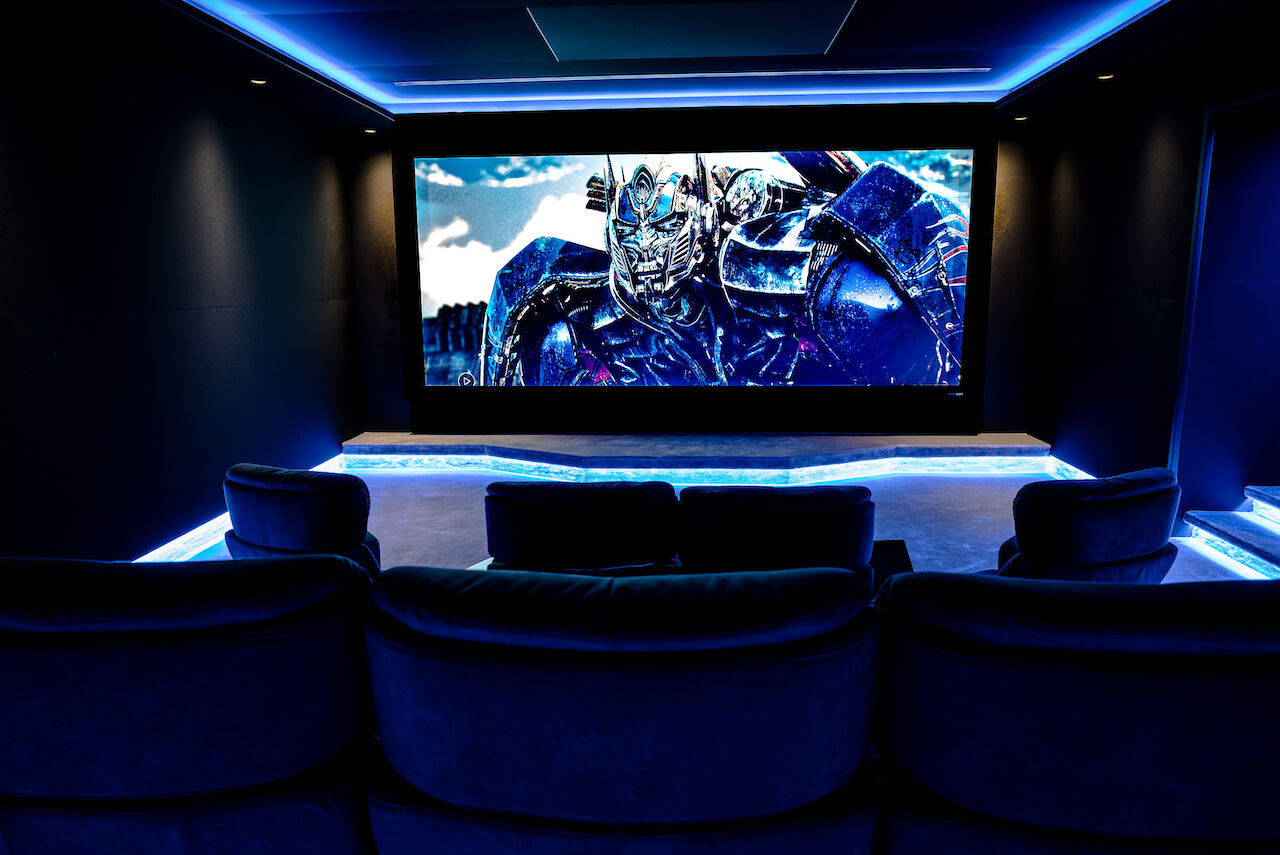 A Theater that is Truly Extraordinary: “Bio Royal III”

Procella Star Wars Cinema as experienced by Jonas Olsson of Hemmabiotidningen.se
Translated from the original Swedish

Having visited dozens of High-end installations and showrooms over the past year, I must say this is one of the most impressive ones i have yet to hear and certainly the best cinema I have heard to date featuring Procella Audio Loudspeakers and an Altitude 32. Playing the reference Mad Max trailer simply blew us away, and this is a trailer we have heard a thousand times!

The Procella Star Wars Cinema is located in a beautiful sea-side villa, just south of Gothenburg. There you will find probably the coolest and most ambitious privately owned cinema in Sweden. You might never guess that this stand-alone building holds an absolute world-class Home Theater, with nothing missed even down to the smallest detail!

This is the third and most spectacular home theater built by owner Mats, who has been planning for years to create the ultimate no compromise cinema. And now, in his dream house, he has finally achieved it.

According to Mats himself, without compromise meant taking things to an absolute crazy level when designing and choosing each and every detail of the room and the equipment. After taking everything into account, the cinema took more than a year to complete. 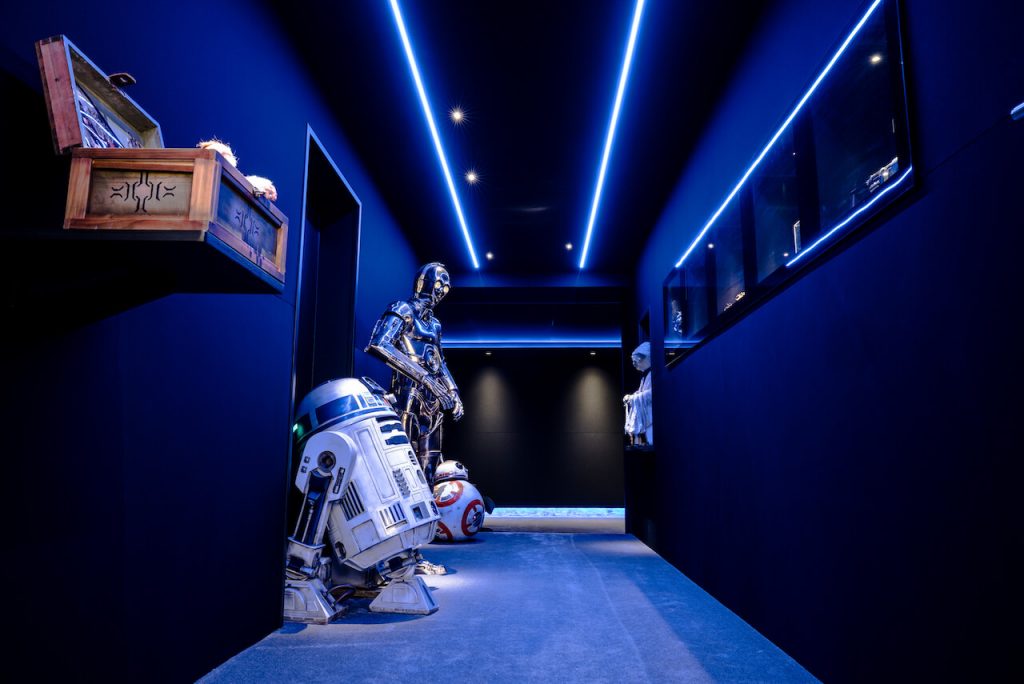 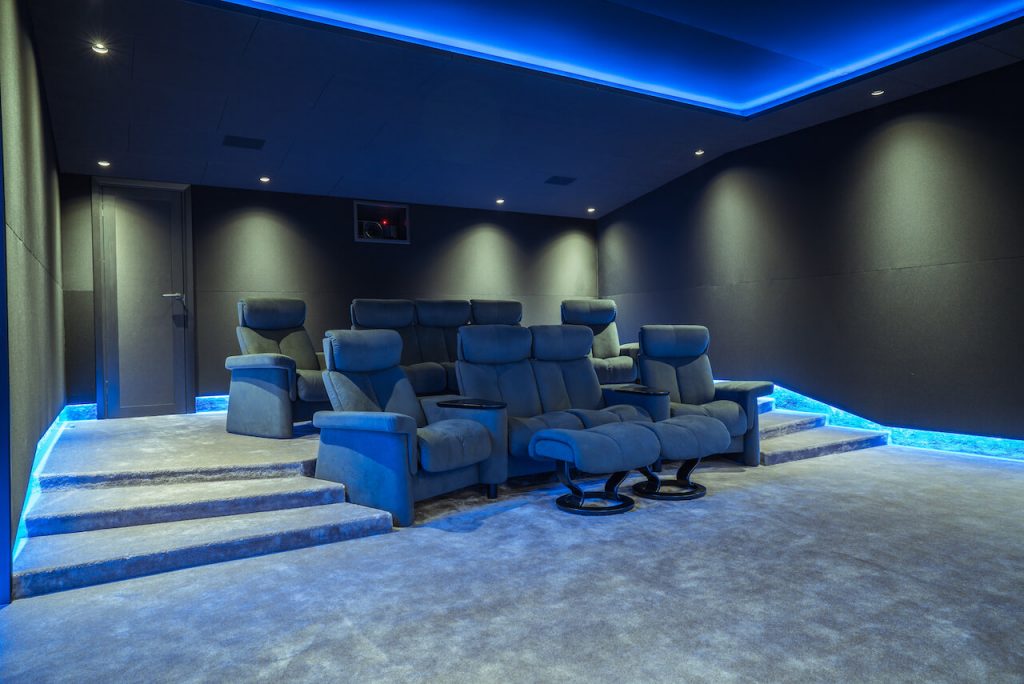 It’s rare that a home theater owner can call on personal experience with not just one but two previous theaters, but Mats took full advantage of what he had learned. First and foremost, he understood that extensive planning is required well before construction starts. In fact, Mats planned at the same level for his entire residence, making certain that the house has state-of-the-art audio and video distribution and control throughout, including, for example, control panels in all rooms for operation via Control 4.

Look around the entire house, and you’ll never see a single visible cable. As I walked from room to room, I was amazed at the elegant impression, with everything so thoughtfully and nicely done. No expense was spared to complete the impression; custom fixtures are used throughout.

The Room
As impressive as the luxury feel of the entire house is, we have yet to reach the most impressive part of the property – the Procella Star Wars Cinema! So we now move to a side building that originally served as the pool house. The pool has been retired, but the pool house itself has been converted into a stunning home theater.

Let’s go in!
One enters through glass doors, custom etched with Star Wars illustrations. Beautiful. Moving further into the hallway that takes you into the cinema room, the atmosphere takes on a completely different feel than the rest of the house. You are greeted by, among other things, a full size R2-D2 and Yoda, surrounded by original movie props in illuminated glass stands. The robots even greet you as you enter, lighting up as you enter the hallway.
With an excellent starting dimension of 6 x 12 meters, or about 70 meters square, the finished cinema, incorporating concealed custom acoustical treatments, measures 6 x 8,5 meters. The ceiling height ranges from 2,3 to 3 meters, and a separate machine room is located at the rear of the theater. 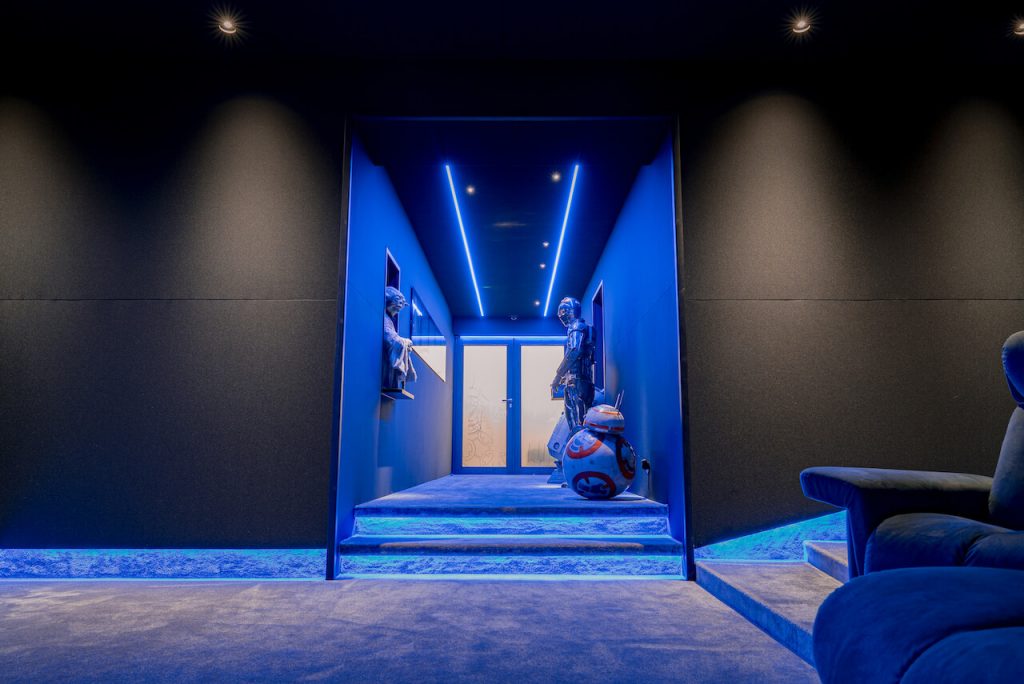 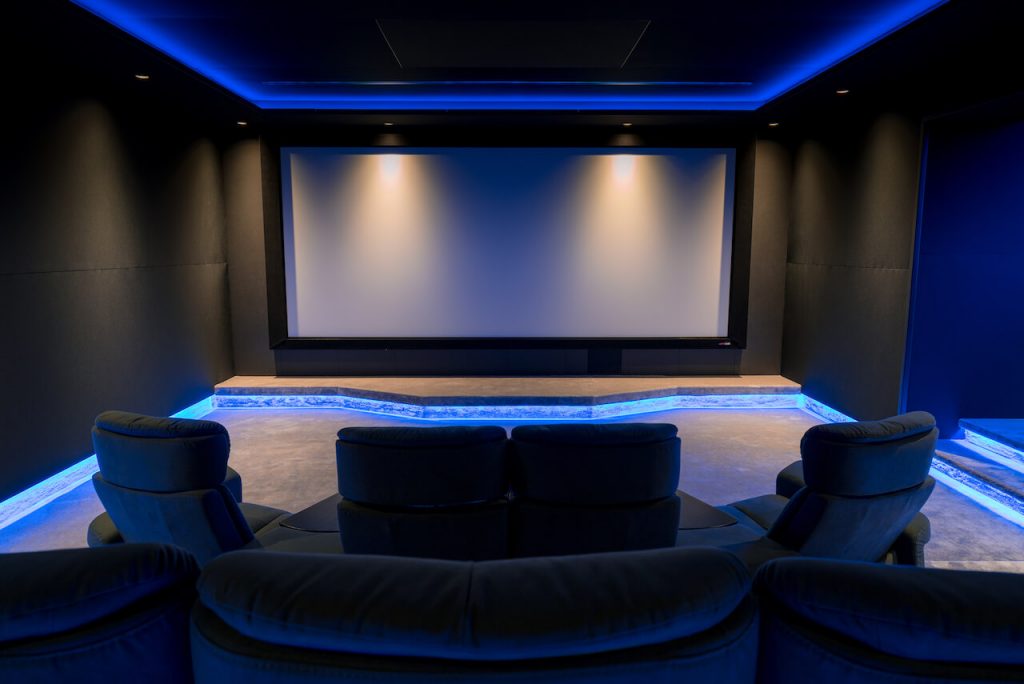 Located behind the machine room’s soundproof door is a sturdy rack containing all the electronics for the cinema. There’s a stack of mighty amplifiers from Procella, driven by the Trinnov Altitude32 24-channel processor. These electronics deliver not only state-of-the-art audio performance, but because they come from companies with pro audio backgrounds ensure delivery of that performance for years without obsolescence. In fact, the Trinnov processor runs custom software on a Linux-based Intel processor platform, which enables downloadable software upgrades that are regularly provided by the manufacturer, including the most recent: an exclusive upgrade to DTS:X Pro.

The same forward thinking also applies to the brilliant 4K three-chip laser projector, JVC’s flagship Z1, which is isolated from the theater behind a port sealed with optical glass and mounted at a slight tilt to avoid reflections

The machine room also contains a sophisticated ventilation system feeding multiple ventilation ducts, including over the podium. The air conditioning fan coil is hidden above the ceiling, which consists of Ekophon acoustical panels with no visible attachment. In keeping with the quality of the rest of the theater, the air conditioning keeps the room cool even when every seat is filled during long viewing sessions.

The Experts
Even though the theater reflects Mats’ vision, and he acted as the supervising general contractor throughout the project, he didn’t hesitate to bring in experts to produce the best result. And he didn’t hesitate to bring in the best. One of the first was Anders Uggelberg, a well-known gentleman in both the home theater and commercial theater worlds. He is not only the designer behind Procella, but a professional cinema designer with hundreds of rooms in his portfolio.

For the room acoustical design of the Procella Star Wars Cinema, he also brought in one of the world’s top experts. Before construction started, everything was carefully planned under the supervision of Ingemar Ohlsson of Audio Data Lab. Ingemar did the complete acoustical design of the room, providing both construction and acoustical treatment drawings. A key part of the process was Ingemar’s 3D computer model of the room, which was used to run acoustical simulations before finalizing the plans.

The Theater
Because Uggelberg has designed several successful home theaters using the French Trinnov processor, he recommended it as a well-proven audio component that capable of delivering cinema sound with the Procella loudspeakers that can blow you out of the chair with power and blow your mind with finesse.

There are two rows and a total of nine seats in the theater. Mats choice was the Stressless Legend recliner from Ekornes.
Look at the walls, and all you’ll see is smooth black fabric. No visible gadgets or wall displays. But what you do not see is key: the variety of acoustical treatment materials carefully located in Ingemar’s design. No less than four tons of absorbers and diffusers are attached and isolated with incredible amounts of glue to ensure that nothing rattles, even when the subwoofers are operating at earth-shaking playback levels. In fact, the rest of the room has been similarly treated to ensure there are no unwanted buzzes or rattles.
Because the room is only used for watching movies and concerts, there are no attractive but ultimately distracting decorations as you see in the rest of the residence. There’s nothing visual to distract from the movie experience or to take away from the special feeling visitors get when they step down the stairs to the cinema room. They feel the thick carpet, sit in the comfortable cinema chairs and take in the massive movie screen. There are light fixtures with stylish moldings, but they disappear as the lights go down. Mats says, settle into your seat with a bowl of popcorn, and you will just focus on nothing but the picture and the sound. 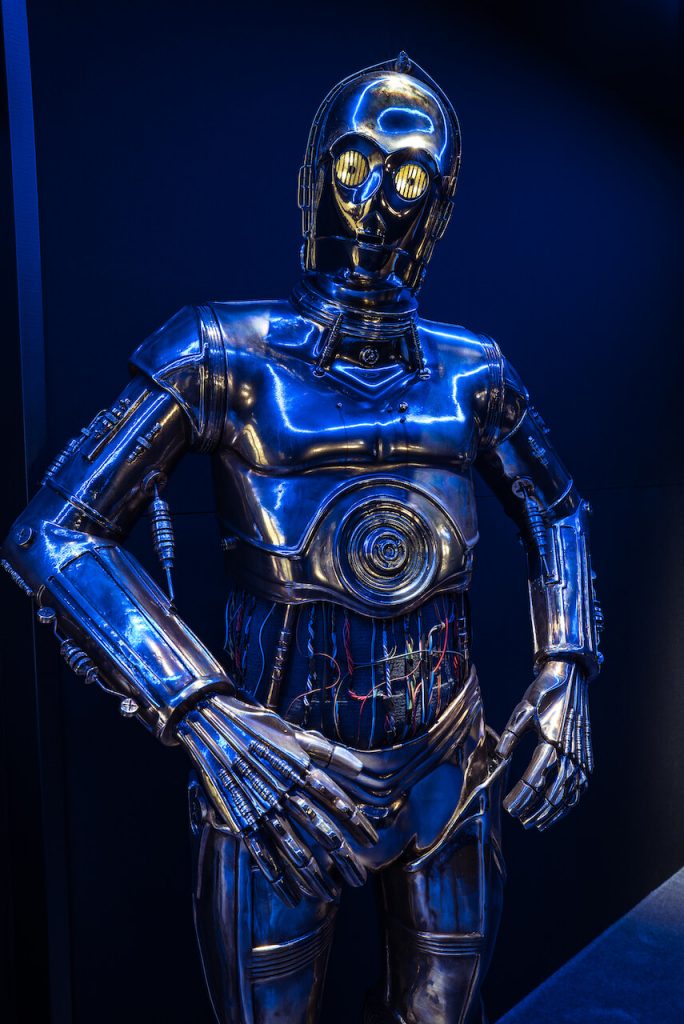 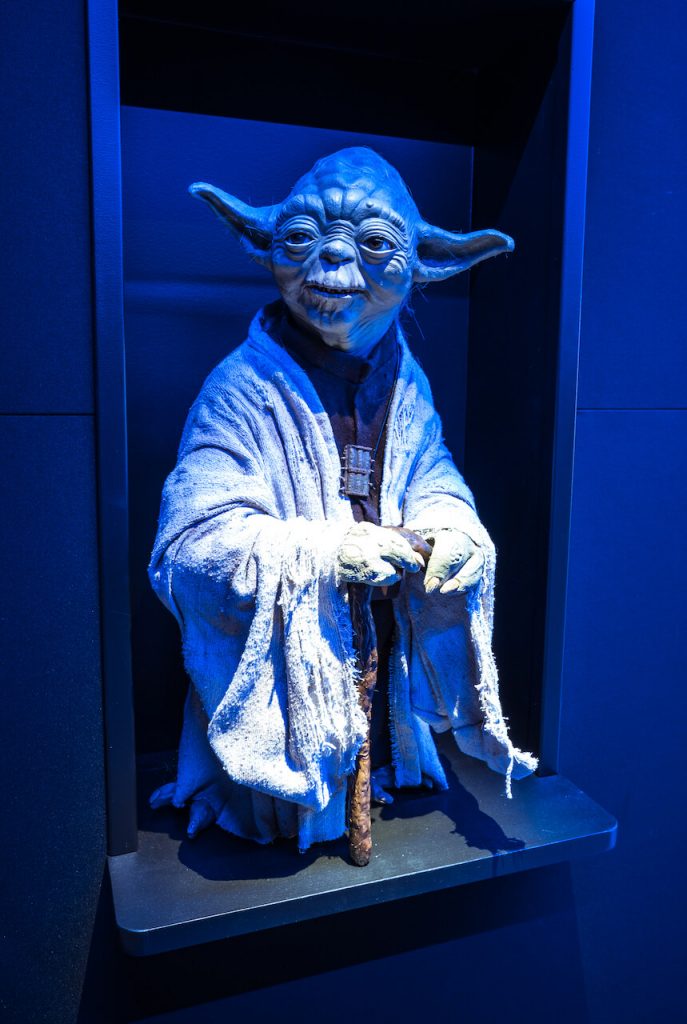 What was it like watching a movie in the Royal III cinema then?
Well, this was absolutely one of the best movie experiences I’ve ever had – by every measure! We started by sampling the best cuts from of a couple of Dolby Labs’ Atmos demo discs, scenes I’ve probably heard and seen a hundred times.

The immediate impression was a sky-high level of detail with a razor-sharp focus. Placement of sounds was incredibly precise and filled the large cinema room with such immersion that you just smiled.

Anyone that remains skeptical of how much a well-installed Atmos system enhances the movie experience is guaranteed to be converted after such a demo.
Because my host really enjoys kick-ass sound at reference playback levels, some superhero movies followed. I was hard to believe the sound pressure that was being created! For example, we played one scene from Shazam three times – one after the other – just because it hit so unbelievably hard. Yet the sound was completely clean and free of any distortion. Our grins got wider every time!

And we were watching movies, so let’s not forget about the picture! The huge image produced by the JVC projector matched up to the sound incredibly well, producing bright, sharp images with an extremely wide color gamut, deep blackness, and magnificent contrast. 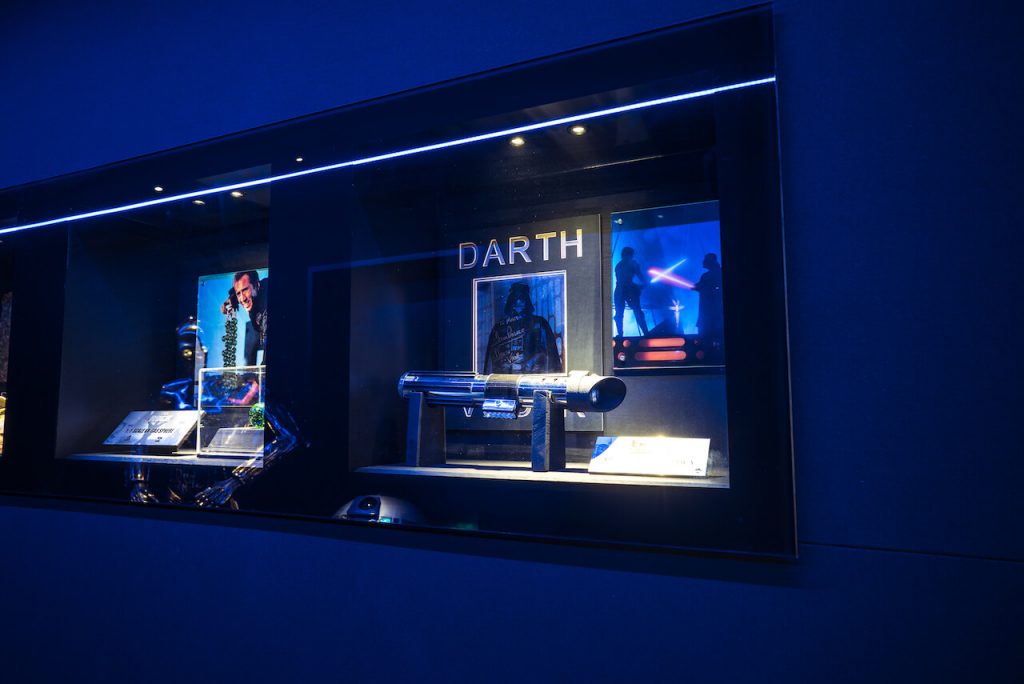 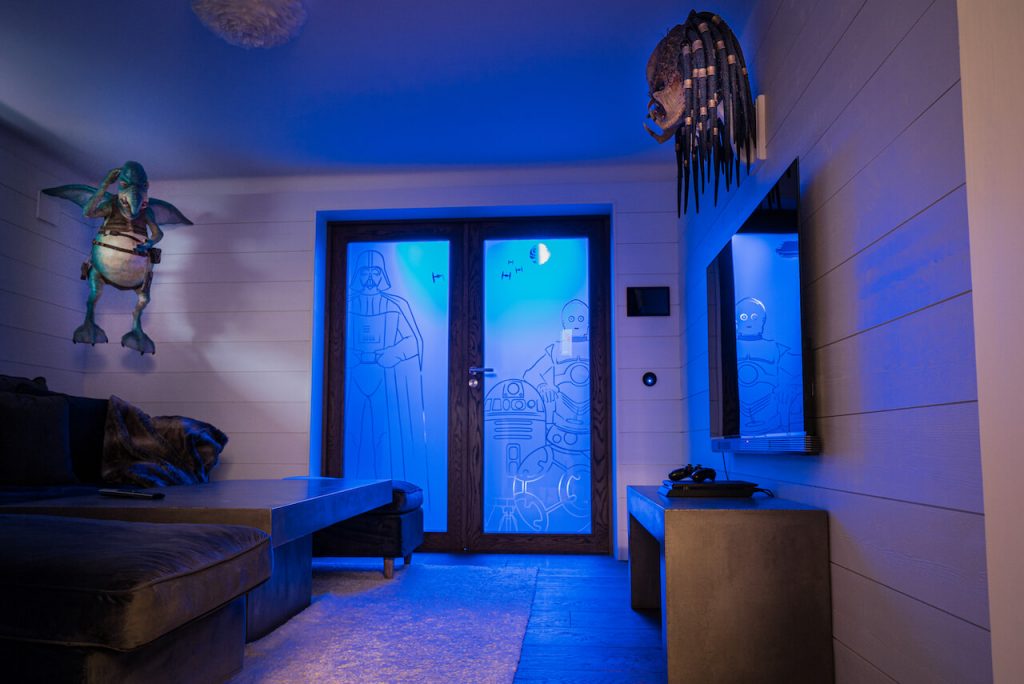 In conclusion, I have to say it is really cool and quite a privilege to experience a home theater of this high class of performance and construction. It’s hard to imagine that there is another privately owned cinema at the level of Royal III in Sweden. This is a unique house and a home theater, not just in Sweden but anywhere in the world. With such quality and level of performance and function, and all the neat details, I congratulate Mats on achieving such a fantastic result and for sharing with me a world-class experience.

Thank you Jonas Olsson from Hemmabiotidningen